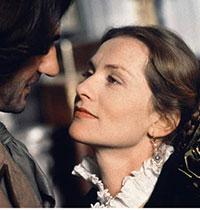 We are pleased to announce that Isabelle Huppert is the Honorary President of Flaubert 21, an event commemorating the bicentenary of the birth of Gustave Flaubert, carried by the Normandy Region, the University Rouen Normandie, the Departments of the Seine-Maritime and Eure, the Métropole Rouen Normandie, the cities of Rouen, Le Havre, Evreux, Deauville, Canteleu, Ry, Lyons-la-Forêt, the Institut de France, the Académie de Normandie and the DRAC de Normandie.

This event is included in the calendar of national commemorations 2021 by the Institut de France.
During a visit to Rouen and Saint Etienne du Rouvray, last February, invited by the cinema l'Omnia and the Théâtre Le Rive Gauche, Isabelle Huppert was able to exchange with Catherine Morin Desailly, Senator of the Seine-Maritime and President of the Commission Culture of the Normandy Region, on this event, at the time in preparation.

This Flaubertian year will be rich in artistic, cultural and educational proposals. Thanks to the commitment of all, the public will be able to discover or rediscover the work of this Norman writer, still very modern in many aspects.
For all the members of the Flaubert 21 Steering Committee, the Honorary Presidency rightfully and clearly belonged to Isabelle Huppert for many reasons. Her remarkable performance of Madame Bovary in the eponymous film by Claude Chabrol in 1991 brought to the attention of the general public the richness of Gustave Flaubert’s novel. Her knowledge of the work of Guy de Maupassant, friend and follower of Flaubert, is also recognized by all. Her sensitive reading of the tales of Guy de Maupassant, in February 2020 at the Rive Gauche Theatre, was a real success. Finally, the affection that the Normans have for her is real, as evidenced by the enthusiasm that her presence aroused in Rouen at the cinema l'Omnia and at the Théâtre du Rive Gauche.

Her wishes for success accompany us in this year that will offer great discoveries for all.